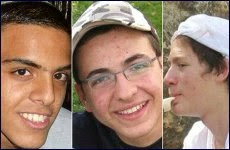 The old year of 5774 ended with the death of the kidnappers of Gilad Shaar, Eyal Yifrach and Naftali Frankel. Two were 16 and the other was 19.  One held dual citizenship with the USA.   Their bodies were found on June 30th in a shallow grave in a field near Hebron 18 days after they had been missing.  They had been taken by accepting a ride since they were hitchhiking.  That's something that's very common to do in Israel, usually giving soldiers a ride who hitchhike from post to post. At least the soldiers carry their weapon.
The boys accepted the ride  from a junction in the Gush Etzion bloc just south of Jerusalem where they had been attending a Yeshiva.   They were going to become rabbis.   IDF's chief of staff, Lt. Gen. Benny Gantz told the news reporters that on the day before Erev Rosh Hashanah, September 23rd, the two men they had suspected were killed in a firefight in Hebron  with Israeli troops when they tried to apprehend them.  The Israeli troops had surrounded the house where they had been hiding for more than 3 months.  All that time Israel had a tremendous search going on to find them.

How did the IDF know who did it?   They knew Hamas terrorists did the kidnapping.  They went first by family reputation of Hamas members.  Omar Abu Aysha was a 32 year old locksmith.  His brother was also a Hamas member who was killed in November 2005 while trying to thrown an explosive device at Israeli soldiers during a clash in Hebron.  They had also arrested Aysha's father several times for many terrorist activities.  Aysha was seen last at a family get-together just hours before the kidnapping, but left quickly without telling anyone where he was going.

Marwan Kawasme was a 29 year old barber.  His family was known to have ties to Hamas.  The money to buy the car used in the kidnapping and the guns they used was from Hamas through his brother, Mohamad.  Another brother, Hussam, was already in Israeli custody for helping to bury the bodies and hide the 2 men. Marwan had been detained by the PA and Israel in the past for his activities with Hamas.

The Kawasme family had 2 others besides Hussam arrested  during the operation.