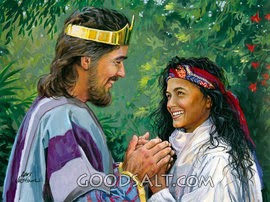 "If thine enemy be hungry, give him bread to eat, and if he be thirsty, give him water to drink; (Proverbs 25:21)"

This is just how Jews are, that's all.  We live by a very moral code handed down to us by Moses, and we're still reading and studying it.  We haven't stopped since Moses gave us the lecture from about 1310 to 1290 BCE.  There's so much to understand in his 5 books of what we call Genesis (Bereishis), Exodus (Shemos), Leviticus (Vayikra), Numbers (Bamidbar) and Deuteronomy (Devarim).  It gives us the moral code to follow and a reason for our living.  It is easy reading as well as very heavy things to think about

The oddest thing happened in Israel.  The very head of Hamas, the Palestinian Prime Minister himself, Ismail Haniyeh's little 1 year old granddaughter from his oldest son, Abdel Salam, had an acute infection in her digestive tract.  First she was taken to Al-Nasr Hospital in Gaza.  Then she was taken to Israel's Schneider Children's Medical Center in Petah Tikva for treatment.  Now she is back in Gaza in their hospital.

This was not the first time that Haniyeh made use of the medical facilities in Petah Tikva.  His brother in law went there 1 1/2 years ago in a cardiac episode.

So here we are, supposedly in a state of cease fire and  Gaza was not to bomb southern Israel but has been regularly.  Hamas is in charge with the job of keeping terrorists from doing this.  Somebody is giving the go-ahead, as they are not being stopped.  And Israel can turn around and treat their loved ones without batting an eye.  Too bad the feeling is never reciprocated.

Proverbs come from King Solomon.  RASHI, the great commentator on the 5 Books, said that Solomon's words are allusions and parables.  When he speaks of a good woman, he is alluding to the Torah.  When he speaks of a promiscuous woman,  he is alluding to idolatry.  Solomon said that wisdom itself loses its meaning without fear of G-d.  Even reading Proverbs superficially gives countless nuggets of wisdom.  He tells us that though money brings us popularity, ill-gotten gains have no value.  It is the quality of a bank account that matters, not its size.  With money comes responsibility to the poor and the obligation to heed their cries.  It's a collection of lessons for life with formulas that give life the only meaning that truly matters.

Remember, Solomon was born a good 3,404 years ago.  Moses cannot be replaced with better lessons for us.  He got his information  from the master himself.  King Solomon was raised on the Torah, the 5 books of Moses.  To see intellectuals sitting around in a Yeshiva and discussing and debating each point is something in itself, an educational marvel.  That's an exercise that our Rabbis engage in.  It's also what makes such great doctors and sharp minds!