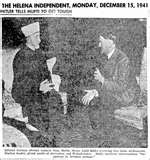 Nazis In Bed With Muslim's Grand Mufti of Jerusalem
65 Years Late Transparency
Nadene Goldfoot
The National Archives have opened up the facts that the Nazis told the Grand Mufti of Jerusalem, Haj Amin al-Husseini 1875-1974, that he would be the overall leader of Palestine with complete control. They even paid him 50,000 marks each month for the job of recruiting Muslims to the SS.
Everyone knew that he was working with the Nazis, but of course, after the war his claim was that he did it to avoid being arrested by the British authorities, who gave him his title in the first place. We realize that his takeover would be followed after the Britsh were gone and the 350,000 Jewish population had been murdered. He was quoted by Abbady, a Jew he spoke with: "
"Remember, Abbady, this was and will remain an Arab land. We do not mind you natives of the country, but those alien invaders, the Zionists, will be massacred to the last man. We want no progress, no prosperity. Nothing but the sword will decide the fate of this country."Al-Husseini represented newly emerging proponents of militant, Palestinian Arab nationalism, a previously unknown concept. Once he was in power, he began a campaign of terror and intimidation against anyone opposed to his rule and policies. He killed Jews at every opportunity, but also eliminated Arabs who did not support his campaign of violence. Husseini was not willing to negotiate or make any kind of compromise for the sake of peace. Who was the Grand Mufti of Jerusalem's nephew? None other than Arafat, leader of Fatah. "Arafat gave an interview in which he referred to "our hero al-Husseini" as a symbol of Palestinian Arab resistance."
The Grand Mufti of Jerusalem also arranged for the assassination of King Abdullah I bin al-Hussein, ruler of Transjordan and then Jordan from 1921 to 1951 of Jordan who was living in Egypt in 1951. He is the leader who met secretly with Golda Meier. The present king of Jordan is the 43rd generational descendant of the Prophet Mohammad. He's married to an American-born "Palestinian" lady who was featured on a genealogy program here in the states. The program had done her family tree.
England's own Jack Philby, a spy for his country, visited Jerusalem in 1929 where he became close friends with the "viciously anti-Jewish grand muft Haj Amin al Husseini. Husseini's role was that of a religious leader. He became so close to him that he converted to Islam in order to receive his 4 wives. The part hardest for him in the conversion was circumcision as he was 45 years old and this was painful at that age, but he was into the whole aura of it all. Jack Philby was a friend of Lawrence of Arabia. His influence reached then President Roosevelt and he was able to turn him against Jews. He also made arms deals with the Third Reich to supply weapons to terrorists in Palestine to use against the Jews.
His son, Harold Adrian Russell Philby, became a well known communist double agent. Like father like son.
These documents went into the US Intelligence and the Cold War and revealed the extent of collaboration between the US government and Nazi officials after the holocaust, also revealed in the book, THE SECRET WAR AGAINST THE JEWS by John Loftus and Mark Aarons. The US National Archives revealed that tracking and punishing war criminals was not high for our Army in late 1946. It does reveal al-Husseinis total collusion with the Nazis while Jews were being exterminated across Europe. Jews in the British Mandate of Palestine were also targets. You can be sure that American Jews would be on the list, too.
The downside is that these documents reveal that the US assisted Nazi leaders like Klaus Barbie, Rudolf Mildner and even knew about the Grand Mufti of Jerusalem is disgusting and a slap in the face to all Jews in America.
We can say that the Muslim goal of keeping the Middle East all Muslim can be on the shoulders of the Nazis who promised such a reward to the Grand Mufti of Jerusalem. He, in turn, most certainly spread this idea to all others of his sphere of influence, which continues to this day. The English also played a huge part in the problems Jews faced before and after the birth of Israel. They promised Jews their country in return for helping their country win in the war, then renegged, winding up doing everything in their power to destroy the Jews chances of having even an inch of the land. Today they still cast nay votes against Israel. And our dear country, the USA, in bed with Nazi criminals, assisting them in the end. What ever were the Nurenburg Trials held for?
http://www.thejc.com/news/israel-news/42607/palestinian-arab-leader-struck-wartime-deal-nazis
http://www.palestinefacts.org/pf_mandate_grand_mufti.php

http://www.danielpipes.org/comments/355
The Secret War Against the Jews by John Loftus and Mark Aarons 514 pages of shocking facts
Posted by Nadene Goldfoot at 9:15 AM