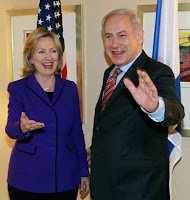 Hillary Clinton is giving the Palestinians $150 million dollars promoting the future state. At a time where the USA has decided to cut federal spending, I find this hard to accept as a Jew and as an American. The money will most likely be used against Israel in the form of weapons, considering the results of a poll recently done. She and Obama have been very vocal about their opposing viewpoint as to what a soverign state as Israel should be allowed to build in their own capital. So we are witnessing our punishment, I suppose.

Most Palestinians want peace, but really are all for destroying Israel and occupying the land themselves. Nothing has changed in their attitude since 48. Nothing has happened educationally by their leaders to crave peace with Israel and to live alongside them in peace. In fact, they themselves are divided into Hamas and Fatah segments and the group designated to for a future state of Palestine has the same end-goal as their nastier counterparts-to see Israel disappear.

In a Yahoo article, the Palestinians are counting on Obama creating a Palestinian state and are holding him to his promise. (Don't hold your breath, Abbas. He promised us that Jerusalem would not be divided.) The Palestinians are planning on having East Jerusalem as their capital.
Abbas " pledged to uphold Arafat's insistence that Palestinians would one day secure east Jerusalem as the capital of a Palestinian state and the right of return for refugees. "This we will have to fight, Abbas. You would fill this small area with zillions of so-called refugees just to have another weapon to create the demise of Israel. This is why we need to have peace talks.