Jews Cheated Out of Land to be Jewish Homeland: Facts of History of Palestine and Israel 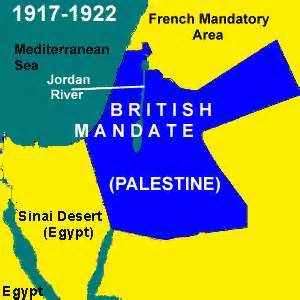 Nadene Goldfoot
All of Palestine was designated as a "Jewish National Home."  This was done legally through international law at the end of WWI in the Balfour Declaration on November 2, 1917.  What happened and how come the Jews wound up with only 20% of land to be theirs once again?  The Jews even had the agreement of King Feisal, king of Iraq and Syria  that it would work out for the Jews to return to their land.  He was one of the leaders who fought against the Ottomans.

"Understanding that Jews and Arabs would have to live together in the Land of Israel, Weizmann strove to create peaceful coexistence between the two peoples. Thus he met in Aqaba with Emir Faisal, leader of the Arab national movement. Faisal expressed sympathy for the Zionist cause, which he felt was similar to the Arabs’ national aspirations."  Weizmann was influenced by Theodore Hertzl, a secular Jewish Austrian reporter  who envisioned a Utopia for Jews.  Hertzl had written "Der Judenstaat" (The State of the Jews) outlining his ideas.

The British held the mandate and were trusted to follow out the rules.  Instead, they gave state domain lands, allocated for the "Jewish National Home,"  to those Arabs who were landless.  They did not own any land, but they claimed they were being "displaced by Jews" in Western Palestine.  The outcome was that land outside the limited Jewish-settled area of Western Palestine was then treated as "Arab" land which was more than 80% of the promised to the Jews' land.

These same Arabs did not think of themselves or even call themselves "Palestinians."  The bulk of all the Arab peasantry in the area came from East Palestinian, Syrian, Iraqi, Egyptian and other neighboring states and had been landless due to the feudal-like societal structures of their own native-born people.  That, along with natural disasters, heavy taxation and corrupt loan sharks kept them poor.  It was not the Jews who were native to the land or the Jews who arrived in the 1880's that who made the Arabs landless.

They were imbued with religious prejudice, and erupted into anti-Jewish violence often whenever their Muslim leaders would incite them.  This happened way before Israel was created in 1948.   After 1917 with the British in the area, they were referred to by the British as being "Nationalistic"-which was in truth subterfuge  to be  anti-Semitic.  The effendis and the Mufti tried to also incite this "nationalism" which meant attacks on Jewish civilians.  T.E. Lawrence did his part also in creating nationalistic feelings among the Muslims, a leftover from inspiring them to fight with him.

The charges from Palestinian leaders of today that the Palestinian people have had an identity with the land that goes back thousands of years is false.  A few nomadic people lived in the land in the 1860's (note Mark Twain's book "The Innocents Abroad".)  It was he and his friends who were the innocents, wanting to visit Palestine who answered the flier saying to join the excursion to the Holy Land and Egypt, the Crimea, Greece, and intermediate points of interest starting in Brooklyn, February 1, 1867.  They took a first-class steamer that would hold 150 passengers.  He gave an excellent description of what he saw.

The charge that alien Jews returned after 2000 years in 1948 to "displace" the Arabs in the new Jewish state is not true.  First of all, Jews hadn't all left in 70 CE.  There were a remnant who remained and were there to greet newcomers who returned throughout the 2,000 years.  Secondly, the plans Chaim Weizmann drew up for Israel included Arabs who were on the land at the time.  It was to be a state second to none as a Utopia. Instead, they were consistently greeted with gunfire.

Palestinians charge that there was no place for them in 1948.  The land to which Arab refugees moved in 1948 included lands that many Arab refugees had only recently left in order to gain the economic  advantages of the small Jewish region within Palestine.  These homelands where they originated included Jordan.  Those who deprived these Arab refugees of homes were the Arab-Muslim leaders.  Neighboring Arab states refused to grant citizenship to those they called their Arab brothers, so they wound up in camps where they reside today.  .  Arab who did not leave when their leaders told them to became citizens of Israel.

Unfortunately, the British treated the land designated to be the Jewish National Home as Arab Land.  The Jews who tried to immigrate during WWII before and after were brutally restricted while the Brits allowed illegal Arab immigration to enter.  Therefore the Brits violated the International League of Nations Mandate by facilitating Arab settlement onto Jewish-settled land and treating the Jews terribly.  (Read "Exodus" by Leon Uris).  They helped to build up the Arab population this way.
Weizmann and King Feisal 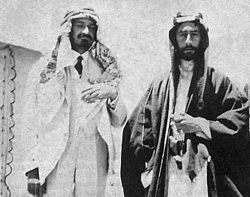 Perhaps King Feisal was not alone in his ability to see that Jews re-entering and developing their homeland would be good for Arabs as well, but these good people have been overcome by religious zealots who have pieced out the anti-Semitic clauses in the Koran and uphold them more than even the Arab countries that hosted Jews for the past 2,000 years as Dhminnis.  All good intentions of Weizmann and other Zionists of his day have been attacked by hatred from the Arab people, except that we see 1.4 million Arabs living as citizens in Israel today and living far better than their neighbors.    Weizmann and Feisal's dreams are working.

Posted by Nadene Goldfoot at 7:16 PM